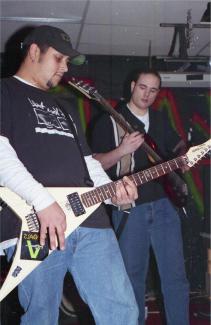 Paul was born and raised in Los Angles, CA and moved with his family to Des Moines in the early 90s. He was active in the Runway since in the early 90s and was in a number of bands including Vexx, Body Pit, and Inveigh Catharsis and promoted shows at the Runway, Hairy Mary's and Z International. He was originally a guitar player but couldn't seem to get into a band. Until one day he over heard some people talking at a music store about needing a bass player. He told them that he was a bass player though he had never played bass before. After borrowing equipment he tried out for the band and got in. He also lived for a short time in Minneapolis and was a member of Anal Blast.

He met DaVo in the summer of 1994 when he came into Creative Images to get his lip pierced shortly before moving back to LA for a short time.  Andy and Shawn talked Paul into moving back from Los Angels to form Slipknot. Which he did in the fall of 1995 and became a founding member of Slipknot. Around this time he reconnected with DaVo and in the Spring of 1996 formed The Have Nots and began working as the doorman at Safari Nite Club which would be his main job until Slipknot left 1998 to record their Self Titled album. He also did a short stent as a member of Joey Jordison's band the Rejects in 1997 and 1998.

As a member of Slipknot he toured international and won a Grammy with Slipknot for Best Metal Performance in 2006 and they were nominated 6 other times and wrote and preformed on four Platinum certified records and one Gold certified live record. Slipknot also won countless other rewards. During his time with Slipknot he was also played with Unida and Reggie and the Full Effect. At the time of his death he was preparing to tour with Hail and was planning a Body Pit and The Have Nots reunions. Sadly we will never get to hear that music.

Paul passed away in May of 2010 and is missed every single day.