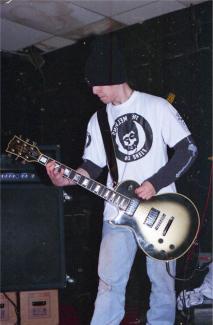 Joey Jordison was born and raised in the Des Moines area. Often counted as one of the top ten best drummers in the world, he started playing when he was 5 years old and began his musical career playing in a number of metal bands that revolved around the Runway scene and filling in from time to time on Drums with his stepdad's Dixieland Jazz band the Maple Street Jazz Band. Though not nearly as well known for his guitar playing, he began playing guitar when he was 6.