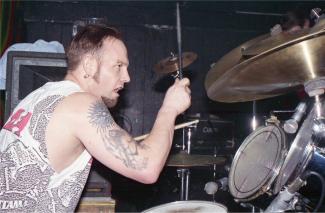 Greg Welts is from Southern California and was part of the early 80s O.C. Punk scene playing drums in a number of bands including Mad Parade and Organized Crime. He was also a tattoo artist.

For a short time he lived in Des Moines in 1995 but didn't stay for long. It was DaVo's offer for a job working at the Axiom that brought him back to Des Moines and lead to him being the drummer for The Have Nots.

After The Have Nots broke up, Greg became a member of Slipknot filling the percussion spot left by Andy when he left the band. Wearing a Baby mask he was known as Babyface and played with the band from late 1997 till shortly before the band signed with Roadrunner records in the summer of 1998.

Since leaving Slipknot Greg has tattooed throughout the upper Midwest and is currently tattooing In Des Moines and still playing drums.