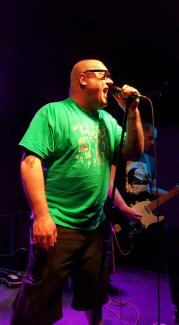 David "DaVo" Wilkins has been an active member of the Des Moines Punk and Music scene since the mid 1980s. Growing up in Des Moines he was faced with two main states of mind, "Why?" and "It will never work." His answer to both has always been, "Why the fuck not."  Always attracted to underground and sub-cultures as a teenager he was an active BMX Freestyler and Skateboarder and started his own trick team Flyin' N Stylin' at age 14 and went on to do a number of Demos throughout Iowa including two years at the Iowa State Fair.

Discovering Punk music in the mid 80s, he began to seek out a local scene that expressed his musical tastes. What he found was a close net group that strongly believed that everyone should contribute to the sub-culture in someway. His first venture was putting out a photo copy zine that only lasted one issue. By the time he was 19 he was networking with other scenes outside of Des Moines and traveling to see bands and help out with promoting shows.

At an early age he developed a love for tattooing and body art and triggered by a desire to get his nipples pierced, he became the first professionally trained piercer operating in Iowa in May of 1994. His studio the Axiom was often a center of the music scene in the late 90s as a place to find flyers for upcoming shows and often as a hang out for those that would shape the scene that would revolve around Safari and Hairy Mary's.

Working as Promoter/Talent Buyer for Safari Nite Club (96 to 98) and then Hairy Mary's (98 to 00 and off and on until it closed in 07) under the flag of Axiom Promotion, he brought countless national underground, metal and punk acts to Des Moines for the first time. Also he was one of the driving forces behind making the early all ages shows a regular thing. First promoting Sunday afternoon shows at Safari bi-weekly and then as he increasingly was contacted by national acts and booking agents into as many as two to three all ages shows a week by mid 1997. Also he managed a few local bands and worked as a booking agent for a short time.

Currently he is piercing at the Axiom Body Piercing Studio inside SKT, is a Talent Buyer at Lefty's Live Music and built and maintains his Personal Site,  The Underground Archives, All Ages Des Moines and this site.