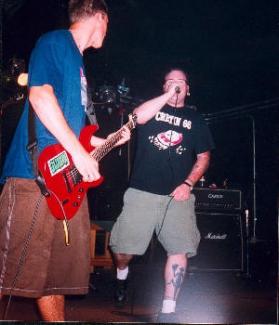 Shawn Crahan had be been talking about opening his own place for most of 1996. Safari under Tony was great but it had many drawbacks including his continuing desire to support Reggae as a focus. I don't blame him, it was his love and he was under pressure to keep things the way they were. I just figured it was all talk like a majority of those people that claimed that they were starting a club. Plus by this time I was promoting a number of all ages shows and had even began to pull in larger Punk and Ska acts. I had mixed feelings when he said that he was buying Safari. Sure he was supportive but I saw him as a metal dude and the direction that I was taking the club was not metal. I feared that instead of Safari continuing to be the host of all these different types of music becoming another Runway.

Plus the place was a dump. Which was one of the reasons that there was so much freedom there but to take it to the level that it needed to be would involve a huge investment. In other words the place was a money pit. The roof leaked, the floor on the stage side was unsafe, the pluming was a shot, the PA was older than most of the people playing on stage and the wiring shouted fire hazard. It was going to take money to upgrade the sound system and fix the many structural problems. Shawn had family money but still.

I was kind of freaking out about all this when Paul told me he was buying the place because I had all these shows booked and didn't really know Shawn all that well. When Shawn stopped by the shop and brought it up, not only did he put my mind at ease about the shows I already had but wanted me to do more. This would take the little Axiom Promotions to a completely different level. In fact the very things I was complaining about in Destroy Madame Wong's like club shows, advance ticket sales and the lot, would suddenly become something I was very much a part of.

On the Have Not front, I felt it coming but I just didn't know when it would happen. Slipknot was starting to take a lot of Joey and Paul's time. Also, Joey who didn't drink was growing tired of Brian forgetting songs and Greg needing breaks between songs. Two shows that stick out are the Sioux City show which was one of our better shows with this line up mainly cause there was no booze and the show a few nights later in Des Moines the night before Thanksgiving. The Thanksgiving show everyone but Joey showed up early and began drinking around 8. We didn't go on till after Midnight. We thought no one would be there but after drinking myself into a good stumpier, I turned to check out the opening band and realized there was well over a hundred people there. By the time we hit the stage, I was drunk, Brian was drunk, Greg was drunk, Paul was drunk and Joey was dead sober. So we hit the stage and spent about 45 minutes playing a set that should have taken 30 minutes. I have the video tape and it amazes me that people stood not sat but stood through it. Joey was pissed by the end of the night. We did a couple other shows under a no drink before we play rule but by February(the first show after Shawn bought the bar) Joey Quit.

I was kind a upset at first but figured it was because of Slipknot more than anything. Then when he started up The Rejects again I was pissed but I quickly got over it. Hell, if I would have been sober during some of those shows I would have more than likely quit. So for a while we just took some time off. Also Greg moved somewhere and left us without a drummer (I had fired him from the Axiom).

We began to search for replacements and by April we had found two. On guitar we brought on a local punk kid by the name of John Aagard and on drums a transplant from Boston named of all things John. To keep them apart, guitarist John, I think because he was 16, became Little John (a name that stuck) and drummer John became Big John or One Footed John (he liked to play with his high hat shoe off. Don't ask.). Big John sounded great in a basement with no PA but had a completely different drumming style from Greg and it struck me as odd that he would take off his high hat shoe. Anyway, we got this last minute gig opening and we debated as to whether Big John was ready. We decided no and Joey agreed to drum for us. The day of the show Big John threw a fit and it almost came to blows between him and Paul. So we told him then play but if you blow it you're out. He agreed and played the worst show we ever did. We gave Brian the responsibility of firing him with the "You found him, you get rid of him." Policy. I don't think Brian ever told him anything and he didn't even know he was out of the band until he showed up at the next show. However the other John stuck and was a member of the band till we called it quits.

Joey played drums at the next show we did and it was by far the best show we ever did. It wasn't my favorite show but by far it was our best. Low and behold in the audience was Greg and with pressure from Paul he was back in the band. We played a number of shows that summer but only wrote one new song NLNF. The song was a driving hardcore punk song with lyrics I wrote in 5 minutes sitting on the couch at Brian's after Paul had played the song for me. Basically it was a call and repeat with the old punk slogan No Life No Future. It really marked a much more aggressive and a return to the early stuff. With Joey gone a majority of the Social Distortion-like songs had left the set and even Joey remarked after one of the shows that we were playing a lot faster.

There is a lot of reasons that a band calls it quits. For me a big part of it was just the lack of time. For a majority of the last year that the band was together I was running my the Axiom, was one of the three hosts of the Public Access Cable show Recline of Midwestern Civilization, Promoting as many as 5 shows a week, singing in the Have Nots and trying to have a social life. On top of that I was usually either at work or a Safari some nights from noon until 3am. I was getting to the point where I was becoming stretched too thin and a little burned out. Plus my interest was being increasingly drawn to Promoting shows.

The cracks had always been there but I carried on because I just couldn't see it stopping. I still wanted to create music but the thing is that other than the shows at Safari and maybe another release I didn't really see it going anywhere else. Which was fine with me. It wasn't like there wasn't interest in bigger things but I had too much going on and unwilling to give up to really move onto the next level. In fact, I had a long conversation with a small Indie punk label that was interested in releasing a record. They even offered some tour support but I didn't even mention it to the rest of the band. Touring wasn't in the cards mainly because I wasn't going to shutter up the Axiom for two months to chase the rock and roll dream around the country. There was just too much to lose. Plus there was Paul's commitment to Slipknot and they were starting to see interest and let's face it they appealed to a much larger audience than we would.

Paul and I first started to address the idea of breaking up and starting a new project. First as an underhanded method of shedding a few members but also because we wanted to do something in a more punk and roll style in the vain of the Humpers or the Pleasure Fuckers. Sure we could have just moved The Have Nots in that direction but we would have still had the old songs most would request we played. In a way were both lying to ourselves, I didn't have the time and it would have just gotten in the way of Paul's focus on Slipknot. The fact is that we had hit a rut but to be completely honest being in The Have Nots stopped being fun.

It stopped being fun because more that anything we weren't writing anything new. The other thing was with Slipknot practicing 3-5 times a week, we never seemed to be able to practice. Also, there was internal problems, I decided to call it quits in October of 97. Our last show was with Blank 77 and The Quincy Punx. I made up t-shirts for that show with spray paint the night before. They had a Have Nots logo on one side and on the other side "Hippy Killer". Every once and a while, I'll see one of them around. At the end of our set Paul broke his flying V and Greg pulled me back into the drums. We went out with a bang like we started. It was good to be over.

Paul and I continued to talk about starting a new project but with Slipknot become more and more a demand on Paul's time it never happened. He did do a short stint in The Rejects after we folded but that would be put to death by the rise of Slipknot and then morph into Murderdolls years later.

The Have Nots was a great time. I wouldn't trade it for anything. Over the years, Paul would bring up us getting the band together again and re-recording the Demo and new songs with different players. A few times it looked like it would happen but something always seemed to get it the way. Either Paul would get a call to do a new project or the demands of my daily life would prevent it coming to life. In fact the last time we talked he said to me that as soon as he got back off tour with the project he was doing, we were going into Sid's studio. I told him I'd be there as I always for Paul. Of course that wouldn't happen and to be honest the reason I haven't done anything band-wise since The Have Nots is because I just couldn't see doing it without him. There was something about I kindred love of music that I haven't found in anyone else. Still there are days when a lyric will come to mind and I get that itchy feeling to start something again.