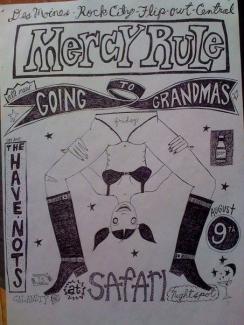 I think the thing that maybe it's hard to understand today with the countless venues and live shows that happen in Des Moines, just how dead the scene had become in the late 1990s. Safari for all of us was a call to arms to make live music happen in Des Moines. The takeover of Safari didn't happen over night and it had in fact been a live venue for sometime. Hosting most Hippy Jam bands and larger Reggae acts. There was a number of problems with Safari in 1996, it was in a shitty part of town, the sound system sucked and the staff along with the regulars weren't really respective to rock music. For one which was nothing new for punk venues.

The owner Tony had saw the venue go for a hot spot to a massive decline that could be blamed on the rougher elements of the crowd. Joey Hollywood and Barry had both been a big part of Hairy Mary's and 2nd Ave Foundry. When the Foundry folded they both found themselves without a steady gig and were brought in as Soundman and Manager respectively. In a way it was like the movie Roadhouse. The idea was to drive out the bad elements of the crowd in a hope to increase business. Let's face it, the easiest way to do this is to change format. Though the Reggae bands would continue to play till Shawn took over the place in February of 97.

Barry and Mr. Hollywood brought in their own people. Including my close friend Lanny to bartend, Bull to do some of the talent buying and eventually Paul on door. With two of my best friends working at Safari quickly it became my home away from home and would be that for the next 11 years or so. The other big part of the Safari's impact was that with the Runway long gone, for the first time the metal and punk/alternative/grunge scenes were really thrown in the same room. It's important because many of those that would drive the over going development of the Des Moines music scene would cut their teeth on that Safari's stage.

Our first gig was a 21 and over show with Mercy Rule and Going to Grandma's. This was our first impression on the Des Moines scene. A majority of the band may have been insiders in the Safari scene but were still outsiders in the established music scene. The fact was that we were mostly outsiders of the Hairy Mary's scene that we were playing to. The show was rough and wild with all the warts, jitters and mistakes that are found in a first gig. To be honest I never really enjoyed playing live. To me it was always the creative part that I enjoyed the most. Once the songs were played, perfected and recorded, I'm bored with them. Yes, playing live was fun but not nearly as fulfilling as writing them.

Toward the end of the set Paul's already wounded guitar started having electrical problems and began to cut in and out. The thing was Paul's curse and often everything would have to come to a stop so that he could pull off the pickup guard to fiddle with the DIY wiring he'd done. After the third or fourth time struggling with it. He lifted the thing by the neck above his head and began to slam it repeatedly on the front of the stage. This wasn't for show or posturing this was pure anger and frustration and the laid back 21 and over crowd wasn't sure how to react other than to step a few steps back as piece of the guitar and the newly built stage began to spray out into the crowd.

Thus ended our first show and I felt that we had done what we had set out to do, make an impacts on many of those in the crowd that were the inspiration for the song Reaction. We the outsiders wanted nothing more than to shove ourselves down everyone's throat. We wanted to mark the coming of a new period in Des Moines Music that wasn't laid back and full of inside jokes. Something that was dangerous and exciting. As Jon from Mercy Rule put it when as he tuned up for his first assult, "Punk Rock". This impression was only increased after the show when at the after party a fight broke out with Greg and local scenester Tom(Total Passover, Del Stars and the Chezwicks) and by the end of the night, our being was well know.

We continued to play out and started to go in what I have to say was a bit of a Social Distortion direction. Joey wrote most of these and out of it came The trail and Alcoholic Rebounds. The Trial was a song about a close friend that had murdered a kid over a stupid argument and to this day is still in prison. Alcoholic Rebounds was a song about the seven day weekend that I was living at the time. I thought both were great but they were definitely a new direction. Also around this time Paul wrote Justin which was definitely in a more Harder direction. I liked it because it mixed things up. We were definitely not hitting a rut yet.

Live, The Have Nots were always hit or miss to a degree. It often depended on the amount of free time the band had before playing. The show could be a tight and fast paced explosion or it could be rambling drawn out stumble through our set filled with countless jokes in bad taste while the band tried to regain control. I think people showed up in part because they never knew which band would be playing that night. We were a great disaster and because of it we became a draw and headlining on our own. Often drawing close to 200 and often on nights when we thought no one would show up. For about the first six months we only played 21 and over shows. This was because that was really the only kind of shows that were going on. Other than three all ages shows during the summer of 1996 the only all ages show was the show I booked in October.

Now this wasn't because there wasn't any younger punks or fans. The demo was getting regular play on the high school radio station 88.1 We even played live on the air. It was entertaining but the mix was awful. The problem is the Des Moines curfew that didn't allow anyone to be in the club under 21 after 9pm. The answer would be shows that ran from 5 to 9pm and on Sunday afternoons. Sunday shows started because Safari didn't have a Sunday liquor license. Basically Tony pretty much gave us free range to do whatever we wanted on Sundays as long as there was no alcohol. So often with a terrible hangover from the night before, we'd open up for local and national acts. This would usually be Lanny behind the bar selling sodas, Paul at the door, Joey Hollywood behind the mixing board and me pacing back and forth hoping to cover my cost.

With a new group of kids hungry for live music to support all ages shows and a number of national bands refusing to play 21 and over, All Ages shows began to bleed into the rest of the week from it's Sunday only exile. By the beginning of 1997 we were playing mostly all ages shows with a rare 21 and over show here and there to make money. Even Slipknot had began to play mostly all ages shows after their CD release party in October. For the first time in years, kids were the driving force of the scene. The Metal kids went to Slipknot Shows and the Punk kids went to The Have Nots shows. In a way Paul and Joey were cornering the two markets.