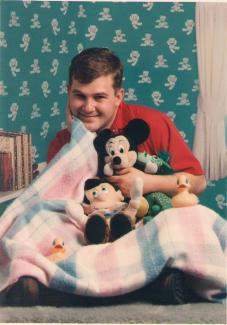 I had met Jay Burmett back in 88 when he had moved up here for a summer. We met through my then girlfriend after she hit on him. It's funny but we started hanging out after that pretty heavy. I lost track of him over the years until he transferred to drake in late 93. Originally from Dallas, he took over guitar duties from Pat though I remember playing a few times with Pat on second guitar.

We did lay down a number of track and even made an 8-track demo of about 3 or 4 songs in 94 but we just couldn't find a steady drummer. So like all the others, this project also failed to be realized. Jay was greatly influenced by Johnny Thunders and kinda gave the sound a more Glam sound. Not really what I was looking for but still equally good.

One night we had been trying to write a new song for hours. Mainly the two of us were trying to point him in a more straight forward punk song. Frustrated and I think a bit as a joke, he said, "What something like this?" and played this choppy kind of scale with this rolling aggressive chorus. I quickly revised some lyrics that I had written about my dislike of the local apathetic music scene that seemed more interested in getting drunk in bars than going to shows.  This is the only song that would make it into The Have Nots set and I named it Reaction.

I think this went on and off for until 95 when he finished college. We also had a few different names including Naked Lady Mud Flaps and Psycho Girl (named after a girl that would follow Jay home every night while he was in Dallas and often turned up in Des Moines unannounced. I think we wrote a song about her too with the same title). Other than the 8-track tape that has been long lost to time, nothing ever came of it. Though I had worked on getting us a gig at 2nd Ave Foundry which Hairy Mary's had become. Between Jay's college schedule and the fact that we just couldn't seem to get a decent drummer to stick it out, things just didn't work out. Jay moved back to Texas, We still keep in contact and I have to say that he is one of my oldest friends and feel blessed to have had him in life. He now lives in Seattle.

The time with Jay and Brian was an influence on what The Have Nots would become. The fact is that some of the lyrics that would find themselves set to the music that Paul and Joey wrote, were carry overs from this period. Also Jay introduced me to a lot of music that I had pretty much dismissed and I doubt without his input, I would have continued to. You see, Punk Rock for the most part was a completely underground thing from around 85 to 92 or 93. Sure there were strong scenes in larger areas of the country but for the most part it was really no longer a national movement. Des Moines had a small group of kids that held out but the idea that Punk would once again come back was thought to be impossible.

Grunge had to a degree brought it back but it was a much more metal tinned and muddy sound than the purity of the brand of punk rock I continue to love. At some point around 88, I stopped buying new releases. Even by those bands I loved because I felt there was far too much old and better quality music to obtain. There was during a car ride with my friend Jett that involved listening to the Circle Jerks Group Sex and X Wil Gift, that had made me realize that the older stuff was much better than the latest releases I was listening to at the time. A majority of what I would listen to for the next 5 or so years would be music from before 1985. I'm not sure why that became the cut off date but mainly I listen to LA and OC Punk.

Jay would introduce me to a few small bands that would make a huge impact on the world and my listening tastes. These included Rancid, Green Day and the Devil Dogs. Even when they began to sign to major labels I didn't for see the huge effect they would have. It seemed over night Punk went from this fade from the 1970s and this retro that was dismissed to a full on invasion of the mainstream. Unless you really lived through it, it's hard to understand what it was like to spend years snatching long out of print records out of the hands of record collectors and traveling hundreds of miles to see a band that may or may not play to suddenly having your movement all over the TV and popular press. By far one of the strangest experience of my life was hearing Bad Religion playing on the local classic rock station KGGO.

See, outside of my little group of friends there was a whole new generation of kids tuning into the Punk Rocks that I had no clue existed. Though there had been a few punk bands that played Hairy Mary's and the 2nd Ave Foundry, they were far in the minority and there was no all ages shows for the new kids and though there was a few local bands that played something close to punk, I wouldn't have really called them punk bands. That was all about to change.