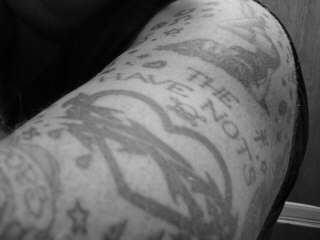 I think I first came up with the name and decide to start a band called The Have Nots around 89 or 90. I came to me after a night of heave drinking and realizing that the Gas at my house had been turned off. It just seemed to fit the way I was living at the time. I was also reading to have or have not. It wasn't until a couple months later when my friend Jett brought up the fact that there was X song named the same. So either it came from the saying, "To Have or Have Not, the book or the X song.

The name quickly became a little bit of an obsession and when I look back at old journals and stuff I wrote from that period it kept coming up. It started to more and more become less of a band name and more of an expression of my mind set. I think it was around this time that I got it tattooed on my arm over a sacred heart.

So, here I was writing like a Henry Miller on crack. lyrics, pose and etc... and before long I had well over 200 set of lyrics with no band to use them with. Often written on anything that was handy at the time when the thought came to me. I was in the habit of carrying a small wired notebook and a pen everywhere I went. When they filled up, I would throw them into a drawer and when I was out of paper I wrote on whatever was handy. My favorite quick and ready form of paper was cigarette packs. If you carefully tear them apart, you can write on the inside of the pack. After a few years I began to paste them into hard bound sketchbooks that I used as journals. Some of those lyrics would make their way into Have Nots songs years later but a lot of them do to my drunkenness are completely unreadable. I remember a girl friend finding one of these and stating that just about every journal entry started with me stating that I was in a bar. It was her that convinced me to type out and organize the lyrics into binders. One of which would be The Have Nots song book. I would listen to whatever Paul or Joey was playing and then flip through the lyrics picking out a lyric here or there. Then writing them down on notebook paper. Later I would edit into the lyrics.

Looking back, writing as much as I was was a little crazy. The state of the music scene in Des Moines wasn't really interested in a Punk band. This was the dark days of Punkdom. With the quick death of Hardcore around 86 or 87 depending on who you believe, it seemed like everyone had either progressed into wimpy college rock, pulled out all the Kiss records that they had been hiding and turned Glam Metal, started wearing dark sweaters and dancing to New Romantic dance music or turned on to the new Speed Metal stuff. Des Moines has always been a metal town and I have to admit, I never really cared for the stuff. By the early 90s, what had been an OK underground hardcore scene had all but disappeared. There was pockets of punk throughout the Midwest like the Ames where the AAMC put on shows on a regular bases. Otherwise a majority of shows I saw during this period involved car trips to Omaha, Lawrence, Kansas City, Chicago and Minneapolis. Locally there was really on three venues that even offered live music, The Hydrant (Jeff of Hairy Mary's fame first bar), Laughing Iguana, Z International (Dance club that sometimes had Industrial and Metal bands) and the Runway.

The Runway or the Runaway as we called it would play a big part in the history of Des Moines music. Though they featured mostly Glam Metal, they did allow Sunday local shows. Most members of Slipknot would first play at the Runway in the countless bands they had before forming Slipknot. Now me being a punk and not caring much for the metal, had no idea that there was a rather healthy music scene there at the time. Even Joey's Glam Punk outfit The Rejects started out but as an outside, I always wrote the place off as a hairy metal venue. It was years later when I meet Paul that I found out there was this cool little scene there. Most of that scene would move on to Safari when the Runway closed it's doors for good.

However at that time, I was more interested in putting my lyrics to good uses and I did what everyone who ever wanted to be in a band ever did, I put up flyers. I did get a few responds but most didn't pan out. One that did was from Gil Bavel. Gil worked at a local used record store called Archives. At the time I was unemployed, and had sold a lot of records there and was working on buying a few of them back. One lesson learned is never ever sell your records cause you'll never see half of them ever again. Anyway, I began working with Gil on Guitar. Gil was a transplant from Lawrence, KS and had been active in the scene down there since the early 80s. We did nail down about 4 or 5 pretty good songs but couldn't seem to find a bassist or drummer. After Gil left Archives, he moved back to Lawrence and that was that. He told me that I was welcome to uses anything we'd written and I said the same. In fact one of the songs with the lyrics replaced made it's way into his next projects, Lawrence, Kansas' very own Way Back Machine's set list. One of the biggest things I took away from working with Gil was being forced to work in a meter.