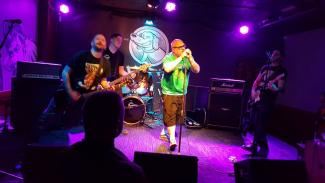 I think about every couple of years life just like to give me a smack upside the head and convinces me that the time has come to get off my ass. It usually involves doing something that I never considered or thought that I would never do again.

The Have Nots in a lot of ways only lived on in the recorded demo. For years many wonderful fans of Slipknot, Punk Rock or just plain music had contacted me about the Demo. I sold out years ago but decided to release the tracks as a digital release but I never planned on reforming.

This all started with me doing something I never planned on doing again. Erik Brown is one of the owners of Lefty's Live Music. We had met in 2015 right before they opened. There was a project to try to do a tribute to Paul on his birthday April 8th. For a number of reasons that I don't want to go into, it didn't happen. However, I built a bound with Erik and began stopping into Lefty's from time to time.

If you don't know, Lefty's is located in the same building as Safari Nite Club and then the second Hairy Mary's was. Yup, 2307 University. At first being there was odd, I found myself looking over to the door area a number of times through the night. At first, it didn't hit me that I was searching for Paul's smiling face that I'd seen at that door so many nights. Even after he stopped working, he would stop by when he was in town and twist my arm into a number of Car Bombs. So, the place has a strong connection to me. Not only Paul but all the members of the Have Nots and a majority of the shows we played was in that room.

In August of 2015, I was lucky enough to promote the reunion of the Hollowmen as a way to mark the relaunch of my website The Underground Archives. It was the first show I had done in about 7 or 8 years. Shortly after that Erik and Anne hired me as a Talent Buyer at Lefty's Live Music and I began to day dream about doing something for Paul's birthday.

In one weekend I had about 5 people ask me why I didn't do a Have Nots Reunion? I was not 100% about the idea, Paul was no longer with us, I haven't talked to Joey for years, Brian has health issues and I knew a reunion would mean a completely different line-up. Also, I really question whether or not I could do it justice.

I was lucky that Rob Ogg jumped at the idea. He pushed this forward as much as I did, if not more. It was out of a love for Paul and the music that he wanted to be involved. It also helped that he is a great guitarist. I asked my son Quinn to step in and play bass. Matt Mutt was called on to play drums. Matt gave it his best and supplied a practice space but didn't work out in the end. Rob suggested an old friend and vet of the Des Moines punk and metal scene, Darren Stout for Drums. Lastly, Rob brought in Jordan Josephsen on Guitar. Jordan saved our asses and figured out the last couple missing pieces of the puzzle.

We did the first show on April 8th, 2016 at Lefty's Live Music. My throat dried out within 30 seconds of our first song, Destroy Madame Wong's. The show was fast and wild. I really had forgotten how much fun it was to play those songs live. Maybe I just convinced myself that it was the case. It was a magical night filled with old and new friends. People that saw us all those years ago and a lot who didn't but to do that music on Paul's birthday just made it something that I will never forget. We ended with a cover of Pennywise's Bro Hymn for Paul and all those that are no longer with us.

After the show it was decided to do additional shows when we felt like it. We played an all ages show in May and then went on hold do to some health issues. We are old people!!! At this point, there are plans to play 4/8/2017 but as Joe Strummer said, "The Future is Unwritten".